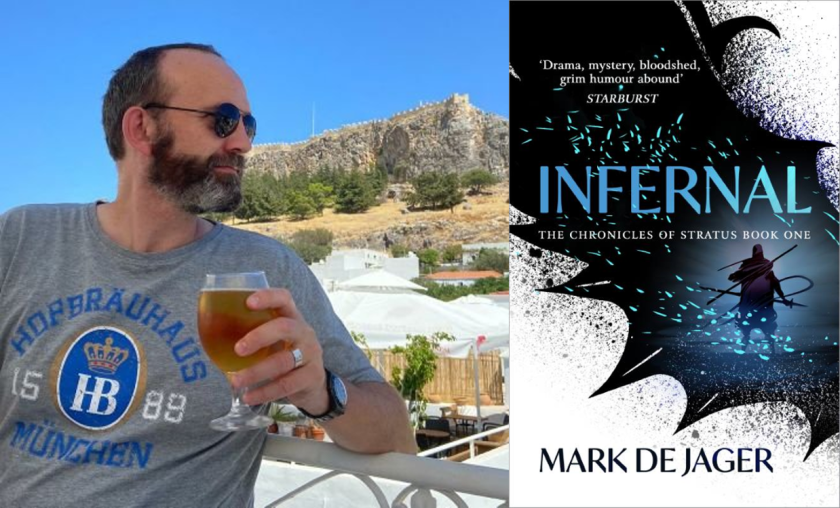 Their bows were more powerful than I had expected, and if I hadn’t been so heavy the impact of the first two shafts might have knocked me off balance and off the roof. The swordsmen were running forward now, and the ladder-man had vanished. I had no time to curse before I slammed into the first swordsman, who had realized far too late that I wasn’t about to stop and offer battle. My shoulder crushed his sword arm against his chest, handily driving the little bar above the sword handle between his ribs. He fell, my fists flew and two of the archers fell, their war over.

Synopsis (from the Sales Sheet):

“Stratus wakes alone, with no memory of his past. All he knows is his name and that he is not human.
Possessing immense strength, powerful sorcery and an insatiable hunger, he sets out across a
landscape torn apart by a war, as a dark magic drives the world to the brink of destruction.
Disoriented and pursued relentlessly by enemies, he will have to learn what he truly is, or risk
bringing the world into ruin…”

I’d like to thank Solaris, Rebellion Publishing, and Netgalley for providing me with a free ebook in exchange for an honest review.

Mark de Jager’s “Infernal” was originally released in 2016 under Del Rey, but Rebellion recently acquired the English publishing rights and they are (thankfully for us!) re-releasing the books in this series. I wasn’t familiar with de Jager or his work before spotting this one during one of my Netgalley requesting-sprees, but I’m glad I had the opportunity to discover him. Infernal was shortlisted for a Gemmell award, and does not come off as a debut. As per usual, I will do my best to get through without giving away any undue spoilers. I realize this book has been on the market for several years, but hey, it’s being given a new life! Everyone deserves to experience it fresh. Here we go!

Our story begins with our protagonist waking up completely paralyzed, naked, and fully amnesiac. Is this a trope? You bet your sweet ass it is; however, it’s more unusual to see this in a Fantasy novel as opposed to some sort of Thriller or Action film. Considering this was a debut, it’s a pretty novel concept. “Infernal” relies on a First-Person narrative perspective, which is… admittedly, not particularly interesting at first. The issue is that our protagonist is a tabula rasa, a blank slate, and when you’re hanging your narrative entirely off of such a character’s internal monologue… it makes it difficult to give the story the proper level of attention.

Any criticism of this text I have effectively stems from the combination of the premise (“Dark Fantasy Memento/Jason Bourne”) in combination with the First-Person perspective. The issue with spending much of one’s time in the mind of an amnesiac is that the internal discourse tends to revolve around questions such as “who am I?”, “who are they?”, and “what the heck is going on?”, which is fine in small doses… but for an entire novel? It can get a little tedious. In addition, any attempt at introspection concerning secondary characters is problematic when the focus is firmly placed on the primary POV character. This is, of course, a matter of preference.

On the flip side, this novel really manages to keep on chugging the entire way through. There is very little in the way of a lull, and “Infernal” is absolutely chock full of action/violence. If you like your books bloody, you’ll really be able to sink your teeth into this one. There is combat, gloriously gratuitous combat! There are monsters, mysteries, orders of Paladins (holy knights), Necromancy… there is even a distinction between Wizardry and Sorcery, which should elicit a smile if you know your Dungeons and Dragons! Mark de Jager’s narrative comes down like a towering wave, crashing into its readers again and again. To give you an idea, I managed to read the entire book in a day. It held my attention, and took me along for a wild ride.

Overall, do I recommend “Infernal”? Yes. It has its faults (and again, that is merely my interpretation), but in the end are we not reading to be entertained? Yes, yes we are! I was certainly entertained, and I am happy this book is being reprinted; I certainly hope many more people are able to discover this entertaining author.