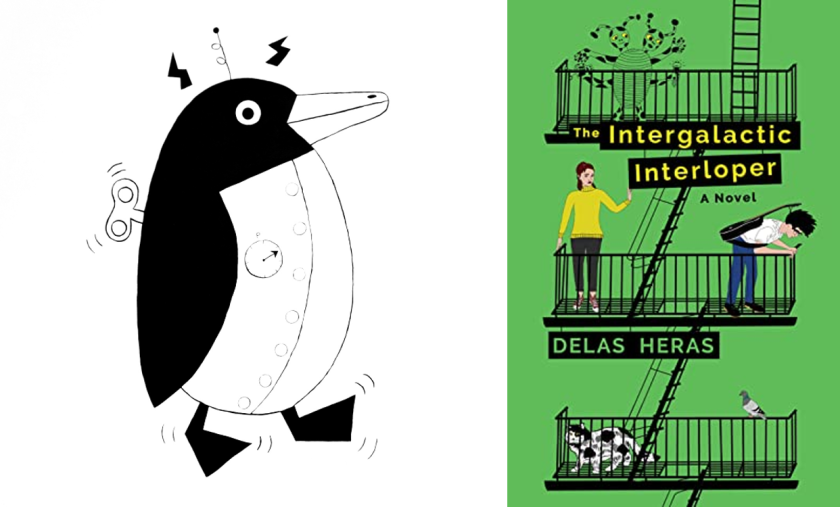 “Out of all the indignities he had been subjected to, being outsmarted by the old woman was what bothered him the most. He had always considered humans to be relatively dim-witted creatures, always running around all over the place, never taking the time to enjoy the simple pleasures of life. And yet, he, the great garden explorer, had been hunted and caught like a blind week-old kitten. And now he was completely helpless. He knew the old lady was just trying to figure out how to finish him off. He could smell it on her. She was clearly deranged – talking to herself and staring into space as if she were seeing things that weren’t there. Obviously, he had fallen into the hands of a whacko cat killer. Just his luck.”

Synopsis: Down-on-his-luck musician Ollie is just trying to make ends meet in Mid-Nineties New York City, but when his cat disappears and he witnesses a real Alien on a nearby roof, things begin spiraling out of control. With the help of his friend Zara and through some improbable events, Ollie’s hunt for Pirate takes him on a very strange and awkward journey.

Welcome, readers! I’m starting a new format as of this review. It occurred to me that not everyone is down for the full evaluation I tend to give a story, so my new standard will be to start by pointing out any resemblance which I feel may help you. Please keep in mind that these comparisons will not always be 100% accurate; I may make mention of a text because certain elements of the one I am reviewing jive with it.

Stephen Delas Heras (going by the nom-de-plume “Delas Heras”) requested an honest review of his debut novel, and I am more than happy to provide it here for you all. At 218 pages, this one was a quick (albeit pleasant) read. I confess to being enraptured by Epic Fantasy (Sanderson’s “The Stormlight Archive” is one of my favorite series), but as I get older and my responsibilities/employment take up more and more of my time, I am increasingly finding it enjoyable to be able to pick up a book I can read in the span of a few days. It allows me to take the time to chew on it a bit, then get on to another text. Good things can and do come in small packages (please don’t destroy me in the comments…). The structure of the text is such that each Chapter focuses on a particular Point Of View character (and there are many! More on this later…); the narration style is 3rd Person, and Heras tends to make us privy to only 1 character’s thoughts at a time (the POV Character’s). This approach is both refreshing and also, occasionally, mildly unsatisfying.

This isn’t to say that I took issue with the writing of the text; on the contrary, I felt the writing was very pleasant, easy to read, and accessible! I’m instead referring to the large cast of characters Heras continually introduces throughout the novel. I felt that the author did an excellent job of giving each character a distinct voice in a short amount of space, but I feel that some of them could have been excluded entirely and it would have left us with a tighter and more cohesive narrative. Constance, a mildly unhinged court stenographer, is a perfect example. If one were to remove her entirely from the story, the primary narrative (the quest for Ollie’s cat) would be exactly the same! And yet… I also feel like some of these nutball characters are more interesting than the primary cast. Constance and her rabbit suit, or Manolo and his perpetual confusion… I found myself gravitating more towards these figures than the well-meaning but dim-witted Ollie (an every-man protagonist worthy of a Christopher Moore novel in my opinion).

The title of the story implies that this novel will primarily feature some sort of Alien plot-line, but instead what we end up with is the hunt for a missing cat wherein Aliens make brief (albeit comical) appearances. When I first put the book down, I was very confused by this fact. It seemed to me that this was a somewhat important oversight! After giving it some thought, I realized that this all made perfect sense: the Aliens are merely an element which touches a certain aspect of each character’s narrative; they are a comedic device. Even the general characters are not the stars of the show, which explains the seemingly disparate narratives. The true star of the show is New York City itself, and Heras is painting the reader an amusing picture of this particular place and time. I liken it to Paul Auster’s “The New York Trilogy”, whereby disjointed narratives are tied together by their geographical connection and the city itself becomes a character. If you can think about the novel in these terms, the structure will seem less confusing and, at least for me, more enjoyable. It’s very clever.

If you fancy a short and sweet piece of writing with some wacky characters, clever humor, and excellent dialogue, I definitely feel like this is one you should give a try. The book releases on August 11/2020 (days away!), and I am certain this debut novelist would sincerely appreciate your support.

Check out Stephen Delas Heras at his website, delas.us